Pope Francis on civil unions: Another step toward common ground with the LGBTQ movement

Underlying the pope’s support for gay civil unions is his own long history decrying homophobia and calling for LGBTQ people to be treated with respect and dignity. 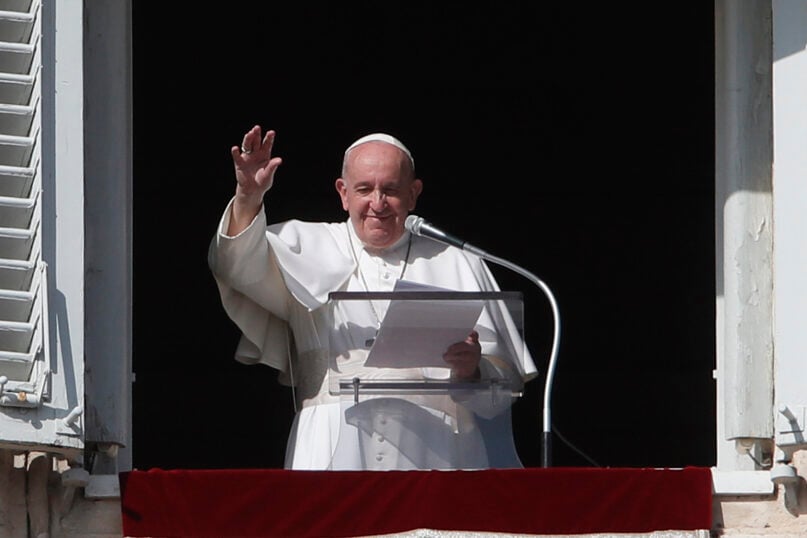 Pope Francis waves at the end of his Angelus noon prayer from the window of his studio overlooking St. Peter’s Square, at the Vatican, Oct. 25, 2020. (AP Photo/Alessandra Tarantino)October 29, 2020 By Alphonso David, James MartinShareTweetShareRedditFlipEmail

As archbishop of Buenos Aires, Francis (then Jorge Mario Bergoglio) made similar statements in private. Later, as pope, he mentioned these legal protections in subtle ways in books, interviews and press conferences, but never as clearly as in the new documentary, “Francesco,” which includes comments on civil unions taken from an interview with a Mexican journalist last year.

The movement for LGBTQ equality has an especially complicated relationship with the Catholic Church, which has only rarely affirmed LGBTQ people’s dignity and their rights to legal protections. History is rife with examples of clergy and laypersons persecuting, rejecting and marginalizing LGBTQ people, even within the church — at times, in violation of the church’s own teaching of love, mercy and compassion.

And while history is also full of stories of radical love and inclusion by Catholic leaders and laypeople (the church’s medical care for those living with HIV/AIDS in the 1980s is one of these many untold stories), senior church leaders’ opposition toward, and minimal advocacy on behalf of, the LGBTQ community is a tragic legacy.

Even today, we see church leaders in Poland declare LGBTQ people as a “rainbow plague,” comparing the movement for LGBTQ equality to Nazism. In Uganda, some bishops have sided with repressive laws that criminalize same-sex relations.

The pope’s comment, then, is but one step in the long and often arduous journey for treating LGBTQ people with the “respect, compassion and sensitivity” that the Catechism asks, and the love and mercy that Jesus demands. 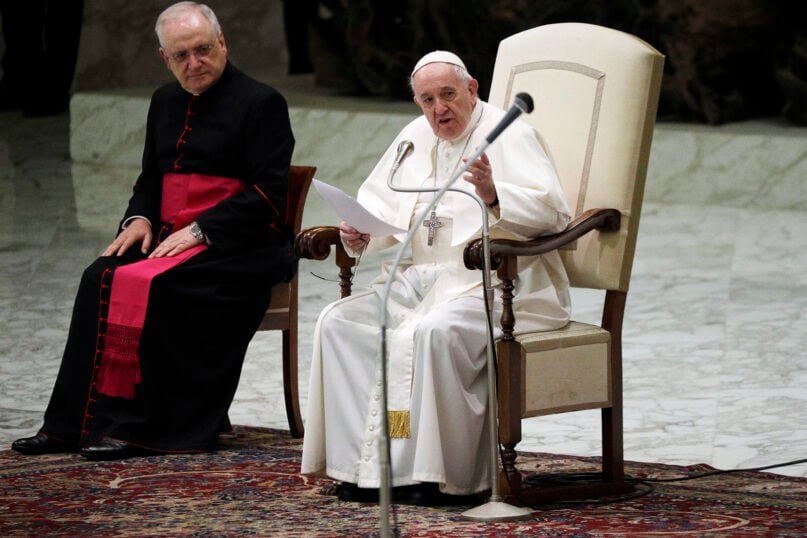 Pope Francis delivers his message on the occasion of the weekly general audience in the Paul VI Hall at the Vatican on Oct. 21, 2020. Francis endorsed same-sex civil unions for the first time as pope while being interviewed for the feature-length documentary “Francesco,” which premiered at the Rome Film Festival. (AP Photo/Gregorio Borgia)

Many LGBTQ people today would agree with Justice Ruth Bader Ginsburg’s famous comment that civil unions are nothing more than a “skim milk” version of marriage. But, though small, this step by the pope helps to establish common ground between the LGBTQ movement and the church, however tenuous.

That common ground is a mutual understanding of our shared humanity and dignity.

Underlying Francis’ statement is his own long history decrying homophobia and calling for LGBTQ people to be treated with respect and dignity. Signaling support for civil protections is but an extension of his overall pastoral ministry to LGBTQ people, which is attempting to reconcile church teaching on human dignity and nondiscrimination with church practice.

It’s worth noting that this is the first pope ever to use the word “gay” publicly. Francis has often spoken of the need for LGBTQ children to be welcomed by their parents and families and has reminded his followers that Jesus Christ would never say, “Go away because you’re homosexual.” His papacy is surely the most open to LGBTQ people in the history of the church.

Catholics in the United States and around the world are increasingly coming to recognize that LGBTQ people belong in the church and that they deserve to be treated with the utmost respect in their homes, in their families, in their faith communities and in the public square.

Francis’ most recent statement may mark a moment for all faith leaders and people of faith to further reflect on how their own actions are advancing — or working against — greater progress and inclusion.

Just a few weeks ago, Francis published his third encyclical, “Fratelli Tutti,” a papal letter addressing pressing moral and theological questions. Rooted in the parable of the good Samaritan, the letter is a summons to affirm and defend the dignity of all by creating more just and inclusive societies. Francis reflects on the underlying imperative of the parable, an ethic of justice and inclusion rooted in our common humanity and the need to defend the common good.

He wrote: “The parable does not indulge in abstract moralizing, nor is its message merely social and ethical. It speaks to us of an essential and often forgotten aspect of our common humanity: we were created for a fulfillment that can only be found in love. We cannot be indifferent to suffering; we cannot allow anyone to go through life as an outcast. Instead we should feel indignant, challenged to emerge from our comfortable isolation and to be changed by our contact with human suffering. That is the meaning of dignity.”

LGBTQ people deserve to be treated with respect, compassion and sensitivity, and deserve to be welcomed and protected. On this, the LGBTQ movement and the pope can find common ground. Leaders within all churches and in the public square can see in Francis’ words an invitation to defend the rights and dignity of the LGBTQ community and to create more just and inclusive societies for all human beings.

This website uses cookies to improve your experience while you navigate through the website. Out of these, the cookies that are categorized as necessary are stored on your browser as they are essential for the working of basic functionalities of the website. We also use third-party cookies that help us analyze and understand how you use this website. These cookies will be stored in your browser only with your consent. You also have the option to opt-out of these cookies. But opting out of some of these cookies may affect your browsing experience. Read More
Necessary Always Enabled
Necessary cookies are absolutely essential for the website to function properly. These cookies ensure basic functionalities and security features of the website, anonymously.
Functional
Functional cookies help to perform certain functionalities like sharing the content of the website on social media platforms, collect feedbacks, and other third-party features.
Performance
Performance cookies are used to understand and analyze the key performance indexes of the website which helps in delivering a better user experience for the visitors.
Analytics
Analytical cookies are used to understand how visitors interact with the website. These cookies help provide information on metrics the number of visitors, bounce rate, traffic source, etc.
Advertisement
Advertisement cookies are used to provide visitors with relevant ads and marketing campaigns. These cookies track visitors across websites and collect information to provide customized ads.
Others
Other uncategorized cookies are those that are being analyzed and have not been classified into a category as yet.
SAVE & ACCEPT